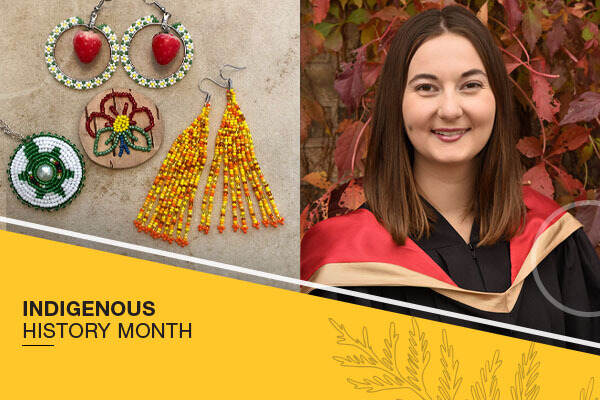 For Leslie Fell, who grew up in the small town of Trenton, Ont., the move to the University of Guelph to study molecular biology and genetics was a big one.

“I chose Guelph for the beautiful campus but also, coming from a small town, the sense of community I felt here made the transition easier,” she said.

U of G is also where Fell began to fully learn about her heritage. Though she had always known she had Indigenous heritage, she had never fully explored it.

“It wasn’t until my third year of undergrad that I finally started going to the Indigenous Student Centre,” she said. “Until then, I was too nervous. But I quickly met so many friendly people and began taking part in events and workshops.”

Not only has she now learned more about Indigenous culture and history, but she has also connected with her own First Nation — the Kijicho Manito Madaouskarini Algonquin First Nation — and has fallen in love with the traditional craft of beading. Jewellery-making and creating beaded art are now some of her favourite stress busters between studies.

It was also at the Indigenous Student Centre that Fell learned of the many financial supports U of G offers to Indigenous students to continue their studies. She applied for and received an Indigenous Graduate Scholarship.

Established in 2016, the award was created to recognize academically outstanding First Nations, Inuit and Métis students pursuing graduate studies in any discipline.

Fell is now entering her second year of a master’s program in applied statistics.